Home/Design, work in progress/Say hello to Xronos Mega
Previous Next

There’s something that I’ve been working on besides Xronos Alarm Clock for the past 6 months.

I don’t have any wall clocks, so I had a store bought alarm clock (Emerson?) with very large digits (biggest I could find) to serve as a time piece by the TV. Just about when I was getting Xronos V1.0 to see the light that “TV” clock died. And so I started to outline a wall clock that will be really big, with tons of features, remote control, and huge LED matrix display.  Thus Xronos Mega Clock was born 🙂

In the end I settled on four 24×16 single color LED matrix displays made by Sure Electronics. Originally I wanted to use same display as in Xronos Alarm Clock (32×16 bicolor): 2 on top would give me 64×16 space for clock digits and then on the bottom I wanted to have a single 8 height row for the scrolling messages that would display date, temperature, etc.  Then I realized it’s going to be huge pain in the butt to drive different arrays from ATMega chip, so I settled on four 24×16 displays.

After I got LED matrix boards from eBay, I realized that my Xronos 1.0 board won’t be able to drive them because they needed extra connections (for 3 more chip selects). It actually lead me to the including those connectors in the V2.0 and subsequent PCBs which now physically support both Sure’s 32×16 as well as 12×16 displays!
Anyway after I got hardware part figured out, I spent days and weeks trying to figure out how to drive these displays and split them logically in two displays (top and bottom).  Florinc’s (WiseClock) as well as BroHogan’s and Nick’s Pong Clock’s driver code was very helpful in figuring out driver part. I think biggest challenge was running multiple scrolling functions in parallel with other things that were happening. I probably taxed full processing resources of ATMega1284 chip 🙂  One thing I’m sure is there’s a ton of room for improvement of the efficiency in the code, especially for programmer better than me 🙂

Currently Mega clock can display time with seconds, scroll date (or any text message) as well temperature from internal sensor and from external one via RFM12B receiver.  There’s an RGB LED in the “eye” of the clock that will indicate … well something like an issue with receiver or incoming alert.  There’s an Infrared receiver and a remote to control clock from the couch, ambient light sensor for auto-brightness adjustment, a speaker and 3 arcade buttons for setting clock’s functions when remote is not available.  Most of these come in Xronos Alarm clocks, however there are few functions that will be new.
Mega clock will have a GPS module for getting exact time from satellites (it’s not connected right now, but I’ve tested and it works great). I’m also thinking of adding a Geiger counter to show ambient radiation levels just for fun. And when I figure out how to run Moteino sensors from batteries for a long time I’ll add a mail box notifier and humidity sensors.  In fact I plan to replace internal temperature sensor with temperature/humidity sensor soon (shouldn’t be hard).

Also I wanted to mention I don’t yet have plans to sell Mega clock due to it’s VERY high cost of making, however if you really want one I can certainty will

And finally here’s photo gallery and a video of clock in action. 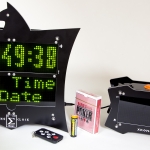 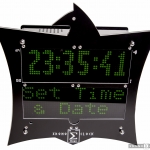 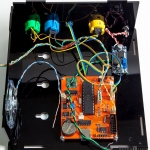 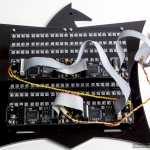 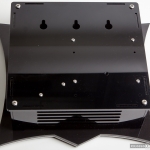 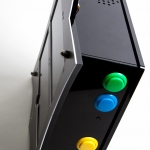 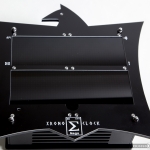 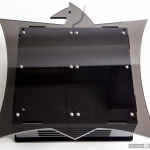